New Delhi: In a major restructuring of higher education in India, the government will allow all affiliated universities to become “interdisciplinary autonomous institutions that confer degrees” by 2035.

According to the proposed guidelines, students will earn double degrees from two different institutions at the same time, earn 40% credits from outside the parent university / university, and the university will form a cluster or in a larger university. It is also permissible to offer an interdisciplinary degree.

The policy also suggested institutional cooperation that once an undergraduate completes a degree course, he or she does not have to take a separate entrance exam and is directly enrolled in a master’s program at a partner institution. 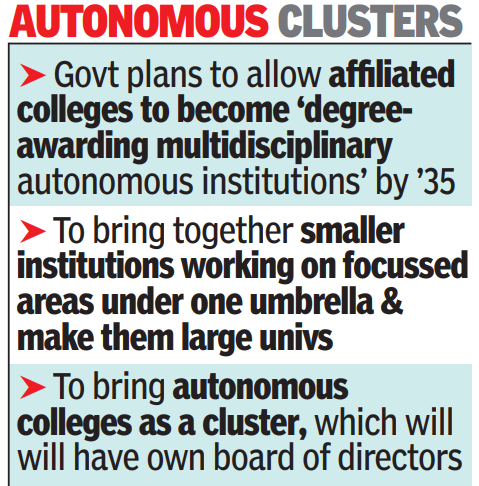 A new draft, “Guidelines for Converting Higher Education Institutions to Interdisciplinary Institutions,” released by the University Grants Commission (UGC) on Friday. Over the next two weeks, UGC will seek suggestions from various stakeholders before the Commission finalizes the guidelines. UGC will finalize the regulation from April to May 2022.

In particular, the reforms proposed in National Education Policy 2020 plan to end the fragmentation of higher education by transforming higher education institutions (HEIs) into interdisciplinary universities, colleges, clusters, and knowledge hubs. increase. UGC President M Jagadesh Kumar aims to establish a large interdisciplinary HEI in or near all districts by 2030. This is one of the most important recommendations made at NEP2020. 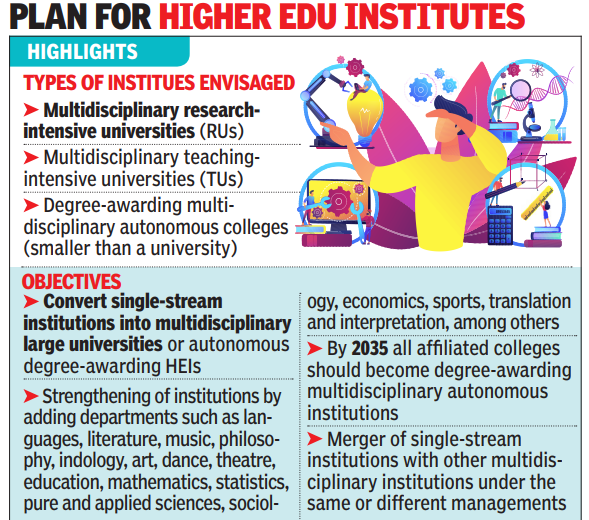 “Today, most employers are looking for people with multiple skills. For too long, our Indian education system has worked in silos, within the boundaries of very demanding disciplines. And we want to get rid of those disciplinary boundaries. The idea is to facilitate easy access for students to different disciplines of a particular cluster or large interdisciplinary university. ” Told TOI.

This policy talks about three strategies. One is to establish additional departments of existing higher education institutions that were not previously core areas. “IIT focuses on technology, and universities like JNU focus on the humanities and social sciences. So, we have set up additional departments to give students access to interdisciplinary education and research. For example, IIT-Delhi can set up departments in various areas of social sciences, international relations, and national security, because it is also important to bring engineers closer to social impact issues. ” He added.

Kumar cites the example of Javahar Laruneru University, which is inherently very strong in the humanities and social sciences. He said in the last five years, JNU has introduced a school of engineering, administration, traditional dance and music, making it a comprehensive university offering interdisciplinary education.

The second proposal is to bring together smaller institutions working in priority areas under one umbrella and transform them into larger universities while maintaining autonomy with their own control. “The third plan is to introduce autonomous universities as a cluster. They have their own board of directors and their own academic council. Students at universities in the cluster have access to each other’s courses and credits. Therefore, these are the three models in which policies are discussed, “Kumar said.

Another reform that the policy suggests is institutional cooperation. “For example, IIT-Delhi and JNU have their own strengths. Therefore, the cooperation of these two laboratories allows students enrolled in IIT’s BTech program to go through entrance examinations and other admission procedures. You will be able to enroll in the master’s program JNU without having to do so. This has several advantages. One is that if a student enrolls in the IIT-Delhi undergraduate program, he or she can proceed to the master’s program if desired. Knowing what they can do means that students don’t have to actually experience the pressure of writing multiple entrance exams. JNU “said Kumar.